Joel and I got engaged back in May. I proposed to him. 🙂
I’ve decided to write a blog about it since I’ve had a few people ask me about. It is kind of a long story… So here you go.

So we have been dating 3 years now. We had talked awhile back and I said I think it would be unique/cool if I proposed. So like adults in a relationship do we talked about marriage and decided we would like to get married in the fall of next year 2015.

Sometime had passed and with the help of Joel’s close friends I proposed.
If you watch the tv show How I Met Your Mother this all will make more sense.

Joel and I met through a mutual friend Nathan who set us up on a blind date a little over 3yrs ago. Our blind date was at First Watch a good/yummy breakfast/lunch restaurant. As you can probably guess the first date went great!
With limited time (Lunch break from work) our second date was at Barnes and Noble (yes we are nerds).
Most of our dates following were at the movies. We both enjoy the movies Joel a little more.
We went to Woodward Park/Rose Garden a lot in the beginning because I love gardens so we spend time talking about many things/getting to know each other.

When it came to me proposing I suspect Joel knew it was coming at some point soon but not exactly when, where and how. I really wanted his friends to be included in it and knew he would love that. We both wouldn’t want anything public so trying to figure out what to do was a challenge. Talking with Joel’s friends I decided a scavenger hunt type idea would be cool.

Had to tell Joel I had a surprise for him so he would shave and dress up a little. 🙂

So I left to meet up with our friends. Left a note for Joel saying to go to the place of our first date.

When he arrived at First Watch (our first date/blind date) our friends (best man) Nathan and Lindsey (who introduced us) were waiting with a small blue french horn (from How I Met Your Mother tv show)
On the french horn it said “Will”
Nathan gave Joel his next clue which said to go to the location of our second date.

At the next location Barnes and Noble our friends Tim and Lisa were waiting with a bookmark that said “You”
Then they gave Joel his next clue which send him to the movie theater.

At the theatre Joel’s best friend Adam (who will marry us) was waiting and at the box office Joel got a movie ticket that said a lot of stuff but in big letters said “Marry”. Adam then gave Joel his final clue which said to go to my favorite park and find the girl with the yellow umbrella (another How I met your mother prop).

As you can probably guess I was the girl at the park with the yellow umbrella on the umbrella it said “me?”
I was also wearing red cowboy boots (if you don’t get it you really need to watch How I Met Your Mother)
I had a ring pop for Joel 🙂
At the park I had my friend/photographer there Katie take pictures. She did an awesome job!

Afterwords we went with some of our friends to dinner to celebrate.

Thanks to all our friends for making our engagement special/happen. Thank you Katie for great pictures/memories.

I’m excited to marry such an awesome guy that I love very much in a very small intimate wedding in September of 2015. 🙂 🙂 🙂 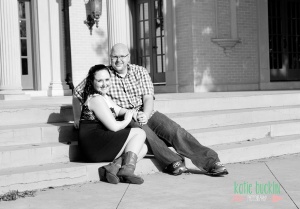